About a week ago I sat down to begin organizing some thoughts for this Michigan Monthly. Candidly, I had intended upon shifting slightly from all the talk about inflation and Fed interest rate hikes, and simply touch on a topic we have visited a few times over the years: branch networks. I thought ongoing branch closures, coupled with limited new branch openings, both nationwide and here in Michigan, might be worth exploring again as the pandemic (and consolidation) continue to accelerate a trend of diminishing physical footprints across the industry. That topic, however, will have to wait for another time.

In a scenario that had always seemed possible (though believed to be highly unlikely in this modern era), quickly became imminent and then, just a few days ago, became reality. A sovereign nation state (Ukraine) was invaded by Russian military land and air forces in an apparent effort to re-build the geographic landmass that was once the former Soviet Union. I do not profess to be a foreign policy expert, so I will take a pass with regard to opining on the geopolitical implications of this action. It does, however, remind all of us that such naked military aggression is historically consistent with the harsh reality that authoritarian regimes will at times do what they want, when they want. Today, the resultant turmoil and chaos in Europe unfortunately also contributes to an already elevated level of uncertainty here in the United States.

This somewhat quasi-dystopian development did bring into relief for me a bizarre confluence of items that, as the title of this missive implies, has been akin to a surreal step-back in time that we have all been experiencing these past 24 months. Covid ushered in a global pandemic that had not been seen in approximately 100 years. Building inflationary pressures, that currently have the Fed scrambling with regard to its dual mandate to carefully balance full employment with modest inflation, was last witnessed to this degree almost a half-century ago. And now we basically need to look back to the Fall of 1939 to compare the invasion of Poland to what is now happening in Ukraine. You will need to excuse me as I opt to take a timeout in the hope that all of this has not actually occurred. Sadly, it has. The human cost to an innocent civilian population in Ukraine has already been heartbreaking, while media footage of citizens taking up arms in defense of their homeland has been nothing short of inspiring.

Thankfully, in time, as it directly and indirectly impacts us here in the United States, the resilience of both the American economy and the human spirit have historically demonstrated that we will get through all of this. A bit beaten and tired, perhaps, but ideally stronger and wiser. The unknown, as it seemingly always is, is time. No one really knows “how long?” this will play out. And while many market experts will venture to guess what the economic and geopolitical implications are of all of this, it is important to remind oneself that the operative word in this last sentence is “guess”.

Up until a few days ago, most market prognosticators were pointing to ongoing healthy economic growth fueled in part by pent-up demand, and the belief (hope) that the Fed could carefully navigate a measured tightening cycle that would serve to tame inflation while not choking-off employment and economic gains. That clearly remains the objective, but for now the unknowns with regard to the ripple effect of global sanctions on Russia, including most recently restricting some Russian banks access to the SWIFT financial system, will add to market turmoil. SWIFT, or the “Society for Worldwide Interbank Financial Telecommunication”, is a secure messaging system that facilitates rapid cross-border payments, making international trade flow smoothly. None of us need a reminder as to the pandemic’s impact on supply chain activity, so, understandably, all of this will probably not help to abate those frustrations anytime soon.

In due course we will all learn if this is, militarily and economically, comparable to “Russia – Crimea, 2014” or potentially “Russia – Afghanistan, 1979”. It would appear that the response globally to the events in Ukraine has rendered remote, at best, any replay of the unsettling echoes of Europe in the aforementioned Fall of 1939. Even Switzerland has abandoned its traditional position of neutrality and announced it will freeze assets and join the EU in supporting sanctions against Russia.

I would welcome the opportunity to discuss with you on an upcoming visit (maybe something akin to a model U.N. from our high school days), the ramifications and repercussions of what is happening globally. Clearly a boatload of questions and myriad paths this can all take, but unfortunately there are not many definitive answers today. I am an ardent student of history, and am fascinated by the developments over the past week, but also cognizant of and sympathetic for the human suffering that has commenced. My personal hope, geopolitics and economic consequences aside, is that a peaceful resolution is reached soon.

On the Homefront, policy decisions at the Fed remain front-and-center. Has the invasion of Ukraine effectively given the Fed “cover” to potentially temper its expected rate-hike efforts, possibly subduing a possible 50-basis point move and instead reverting back to a more traditional 25-basis point hike this month? A week or so ago, Fed Funds futures were signaling that a 25-basis point hike was a near certainty, while 50-basis points had about a 30% probability of occurring (it had been near 70% a month ago but began sliding with tensions mounting in Ukraine). As Russian tanks crossed the border toward Kyiv, the futures market signaled that a 50-basis point move now has less than a 10% probability of happening. Market expectations have coalesced around approximately 5 to 7 rate hikes by the Fed over the course of 2022…has that now shifted to maybe 3 to 5 moves, and/or half-point versus quarter-point increases?

Inflationary pressures have proven stubborn, and clearly nothing close to transitory, as the global economic landscape has grown more uncertain. Domestically, concerns are building that debilitating inflation becomes a self-fulfilling prophecy as consumers accelerate buying to “get out ahead” of rising prices. Conversely, is the Fed already behind in dealing with the inflationary wave, portending a scenario of raising rates too much and too fast? The equity markets have reflected this volatility, with trading activity wildly gyrating on any given day as investors stake their positions on the near-term and long-term paths that this turmoil could take, both domestically and internationally. The bond market, which had begun reflecting the near certainty of multiple rate increases, saw the 10-year yield briefly eclipse 2% recently. The proverbial “flight to safety” that U.S. Treasuries historically possess, has seen the 10-year yield decline in the last few trading sessions and now hovers in-and-around the 1.70%-level. However, as the shorter-end of the curve continued to ratchet-up in anticipation of Fed hikes, the long-end was not necessarily moving in lockstep, so we were witnessing compression of the oft-watched 2-yr. / 10-yr. spread. That “spread”, which had been roughly 130-basis points a year ago, and approximately 80-basis points entering 2022, has further shrunk to 40-basis points today. Such compression, moving toward a possible inversion, has often signaled an oncoming economic slowdown….but not always. Fed efforts to curb inflation by aggressively raising rates, has also sometimes led to choking-off growth and rising unemployment…but not always. And imposition of seemingly draconian economic sanctions in an effort to curb “behavior” deemed unconducive to the world order, can sometimes trigger unintended consequences that may effectively cripple certain economic activity….but not always.

As we talked about a few months ago (Did Someone Say “Volatility”?; December, 2021), it is likely that current uncertainty on the landscape will drive continued volatility in the markets. Layer-in surging oil prices, a continued tight labor market, persistent supply chain bottlenecks for certain products and/or component parts, the ever-present unknowns surrounding Covid (although that “item” appears to be on the receiving end of much-needed encouraging signs as CDC guidelines and state-level mask & vaccine mandates are easing), heightened cybersecurity threats, etc., and “caution” probably takes center-stage in today’s environment. Continue to be responsive to your commercial and retail clients in addressing their financial needs, but (and I recognize I am preaching to the choir) do NOT compromise your risk management practices to simply gain market share. Adapting part of an old Wall Street adage, you do not have to dance just because the music is playing.

While I appreciate your patience in letting me try to sort out some of the issues surrounding Russia’s attempted subjugation of Ukraine and the resultant potential economic shock that may emanate from that war zone, multiple paragraphs later it is still clear that there are many, many questions, and few, if any, (definitive) answers. So, I will quickly shift to simply planting a seed for future discussion regarding the initial intended topic of this piece: branches. The map below reflects net branch openings or closings across the country during 2021. Outside of California, Michigan had the largest net decline in branch count, in large part fueled by the divestiture efforts of Huntington following its acquisition of TCF (which itself reflected the footprints of the former Chemical, Talmer, etc. from years past): 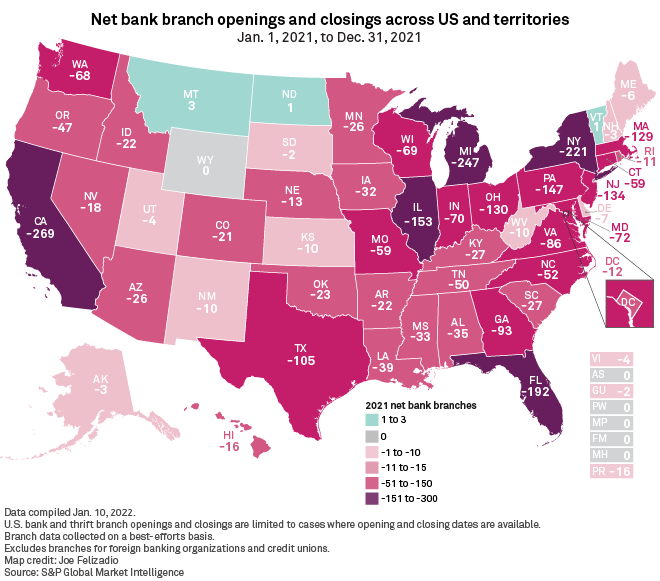 We will pick this topic up at a later time. I believe the branch is still a critical delivery mechanism, and clearly a vital component of a community bank’s identity and local interactions, but technology continues to transform our industry in ways that require a candid assessment of one’s footprint and the optimal means for delivering one’s products and services to its customers. The pandemic, quite simply, accelerated this discussion and the underlying dynamics surrounding digital delivery.

During these uncertain times, continue to manage capital and reserves carefully. Emphasize sound risk management practices and a robust architecture. You are stewards of your shareholders’ investment. The constant, for successful banks, has been adhering to solid credit standards and sound cost controls. This pandemic has distorted many things and forever changed numerous personal and business interactions. And while it is not yet firmly in the rearview mirror, it too will hopefully one day soon pass. Do what you need to do so that when it does, you are still standing with a fundamentally sound franchise and an opportunistically positioned platform to capitalize on any dislocations that have arisen.

In closing, attached please find our monthly summary of Michigan’s financial institutions. As you and your Board take your organization forward, please do not hesitate to reach out to me and/or my colleagues at ProBank Austin if we can be of any assistance in helping you assess the competitive landscape.  My best wishes as you move through 2022. And again, this simple but heartfelt counsel: Be careful. Be smart. Stay healthy. Take care of your family, your colleagues, your community. Most important, be sure to take care of yourself.