Blessed are the Community Banks, for They Shall Inherit the State of Michigan

In a few months, the Michigan banking landscape will witness a development that has not existed in decades — there will be zero independent banks headquartered in the state with total assets of at least $10 billion. Zero. In the last six months, three announcements detailed that the state’s two largest banks (TCF, which is approximately $50 billion; and the $30+ billion Flagstar) will merge with larger out-of-state banks, while another Michigan-based billion-dollar franchise (Mackinac Financial’s mBank, which approximates $1.5 billion) is slated to combine with a Wisconsin organization. As far as Michigan’s current two largest, at year-end 2020 news broke that TCF would merge with Ohio-based Huntington, while last month Flagstar announced plans to merge with New York Community Bank on the East Coast. While Flagstar expects to retain a regional base in Troy, Michigan (and its name, for the time being), to serve as a platform for New York Community’s efforts to leverage Flagstar’s powerful mortgage banking franchise and growing commercial lending efforts, the buck will ultimately stop in New York Community’s Long Island headquarters when it comes to final decision-making.

You have to go all the way back to the early 1980’s to find a financial reporting period that did not exhibit a locally-owned and operated banking institution with assets of $10 billion or more. It was at that time that the venerable NBD, founded in early 1933 during the height of the Great Depression, had not yet eclipsed that size threshold. In the decades to follow, as we have talked about in past writings, the likes of Manufacturers National, Standard Federal, Michigan National, First of America, Old Kent, First Federal of Michigan and Comerica all joined NBD in the legion of large, and profitable, regional institutions. And while Comerica still “technically” exists, albeit with its base of operation in Dallas, Texas, all the others have been swept up in the consolidation wave that continues to reshape the industry. Think about some of those names for a second, and the resultant landscape across Michigan as our largest players have disappeared. Succinctly, as reflected in the chart below, when looking at the most recent tabulation of deposit market shares across the state the graphic is striking: 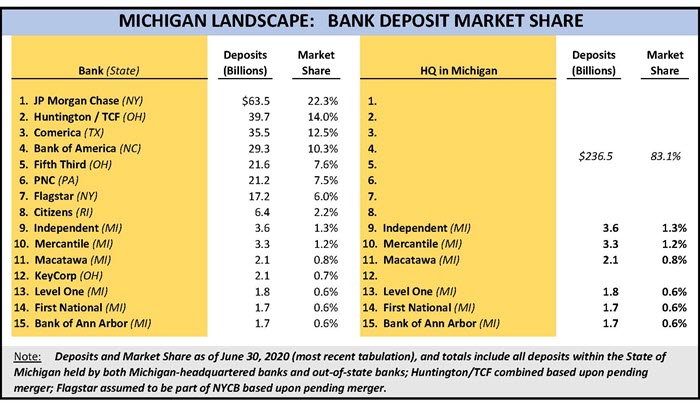 When isolating the fifteen largest deposit market shares in Michigan, nine out-of-state organizations effectively control in excess of $236 billion, or more than 83% of Michigan’s total deposits. It is not until the 9th slot that a Michigan-based name appears on the list. In fact, after accounting for organizations in New York, Ohio, Texas, North Carolina, Pennsylvania and Rhode Island occupying the Top 8 market shares in the state, for context six of the next seven slots are Michigan entities that collectively control about 5% of the state’s banking deposits. Five percent.

Interestingly, once the TCF and Flagstar mergers are consummated, the two largest “financial institutions” headquartered in Michigan will both be credit unions. Grand Rapids-based Lake Michigan hovers just below the $10 billion mark, while DFCU Financial over in Dearborn is now north of $6 billion in total footings. There are also a handful of credit unions scattered across the state that effectively mirror the asset size of a Mercantile or Independent or Macatawa, but that is an article for another time.
And while the state, and industry, could reliably look to new bank (de novo) formation in the wake of mergers, to both back-fill community losses and unleash seasoned talent in attractive markets, those days appear to simply be a distant memory. Some of the names in the chart above were themselves de novo launchings in the late 1990’s or early 2000’s. However, up until Mi BANK was started in the spring of 2019, it had been more than a decade since a new bank opened in Michigan. Consensus opinion, based on regulatory dynamics and ongoing rapid technological transformations, seem to indicate that it may be another decade before another de novo breaks ground in the state. Consequently, the trendline in state charters will probably continue on its current downward path: 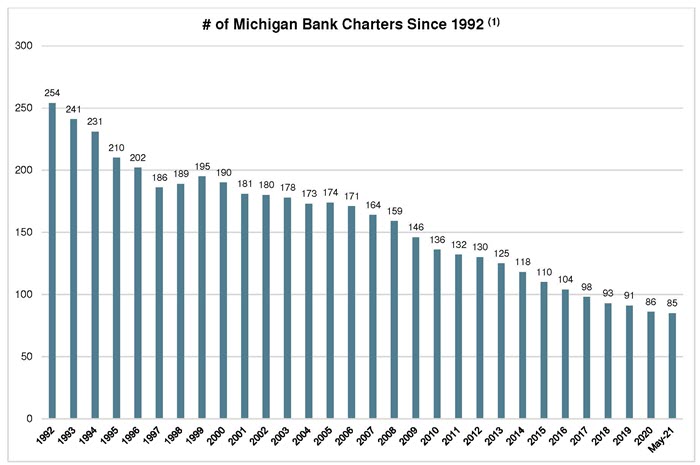 But potentially much in the same way that those aforementioned $10 billion+ names emerged in the shadow of NBD years ago to build formidable franchises across the state, I believe the next generation of leadership resides not only in the names depicted in that earlier chart but also within others domiciled in Mt. Pleasant, Sparta, Fenton, Hillsdale, Coldwater, Hancock, Grand Rapids, Saint Clair Shores, Bad Axe, Oxford, Sturgis and Kalamazoo, just to name a few. The resiliency of Michigan’s banking sector has been tested, and validated, many times over the decades through economic downturns, war, natural disasters, civil unrest, political upheaval, and most recently a devastating healthcare crisis. We always seem to come out the other side both stronger and wiser for those able to weather the prevailing storm. I am not sure what the landscape will look like in another ten or twenty years, and who will continue to emerge and grow versus who too will get swept up in the ongoing consolidation wave, but I am confident that the entities left standing will be formidable organizations in their own right across all asset-size classes. Confident.In closing, attached please find our monthly summary of Michigan’s financial institutions. As you and your Board take your organization forward, please do not hesitate to reach out to me and/or my colleagues at ProBank Austin if we can be of any assistance in helping you assess the competitive landscape.  I look forward to re-connecting with all of you as 2021 continues to unfold. And again, this simple but heartfelt counsel: Be careful. Be smart. Stay healthy. Take care of your family, your colleagues, your community. Most important, be sure to take care of yourself. God bless.