With the Presidential election just a few days away, the markets have experienced a few fits and starts in recent sessions, as investors wrestle with the potential implications of the results, compounded by the possibility that such results may not be known for some time after November 3rd. As it relates to the banking sector, following a Q2 that saw almost all of the nation’s largest banks aggressively build loan loss reserves in anticipation of what may lie down the road, Q3 thus far has been a seemingly comforting (albeit temporary) sigh of relief for most bank investors. Fueled in part by commendable (and profitable) PPP efforts, particularly at the community bank level, and almost other-worldly mortgage banking revenue-generating activity in this low-rate environment, bottom-line numbers across the sector have generally easily exceeded expectations. The positive “psychological” impact of the bigger banks dialing-down their provisioning in this most recent Quarter, at a minimum, has offered some glimpse of hope that the anticipated onslaught of delinquencies and charge-offs expected to arrive in mid/late 2021 may not be as severe as first projected in the early days of the pandemic.
Yes, margins continue to be under intense pressure, with balance sheets awash in stimulus-related liquidity, while quality loan growth (outside of PPP activity) remains a formidable challenge.  Hence, this margin pressure will probably not abate anytime soon as the Fed has signaled the likelihood of near-zero rates through early 2023, as that appears to be the monetary policy course required to help nurture our economy back to health. As reflected in the following chart, job recoveries in September slowed to approximately 661 thousand (versus general expectations in the 800 thousand range), but fortunately still reflect a recovery trendline: 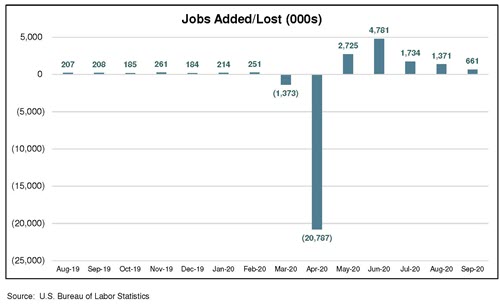 Unemployment, while still elevated and hovering at Financial Crisis levels, fell to 7.9% nationally in September. Here in Michigan, the unemployment rate is 8.5%. Although still more than twice the level recorded pre-pandemic, keep in mind that Michigan’s rate had soared to approximately 24% in April. The U.S. economy shed more than 22 million jobs in the spring as consumers and businesses sought safe, common ground in trying to deal with the debilitating effects of Covid-19. At first blush, the September jobs recovery report may appear to be a slight disappointment in terms of expectations, but it seems obvious to many that as the pandemic continues to roll through communities, the recovery in lost jobs will likely come grudgingly. The key is that we are still looking at recoveries. In recent months,  that number has totaled more than 11 million. But, while the gains in part reflect the “low-hanging fruit” related to businesses that were able to quickly re-open largely intact, the longer-term implications of those in the hospitality sector, service industries, etc. that may have been dealt permanent losses is still being gauged.
Consequently, as our headline notes, the aforementioned election and pandemic unknowns are now further complicated by an ongoing congressional stalemate with regard to new stimulus relief efforts. I hark back to Fed Chairman Powell’s comment a few months ago: “The path of the economy will depend significantly on the course of the virus.” The banking industry’s reserve building in recent Quarters is in part a function of what level of permanent job losses result from all of this and the ripple effects of those losses on different sectors of the economy. Government support, while hopefully sustaining many until safe re-openings and a cautious return to normalcy can unfold, has surely to some degree also artificially propped-up some businesses that have seen their air supply cut-off, but their oxygen has not yet fully dissipated. Take comfort in recent earnings releases highlighting that deferral and forbearance activity has materially declined of late for many banks (and clearly contributed to more normal provisioning in Q3), but I’m not sure anyone is ready to say that the economy is completely out-of-the-woods at this stage. Millions have returned to work. However, millions also still remain on the sideline.

The other two items both relate to the growing trend of credit union acquisition activity in the banking space. Both occurred on the westside, with one being a traditional branch divestiture, the other was a whole-bank transaction. On the branch front, the $4.4 billion Grand Rapids-based Mercantile Bank announced plans to sell its Hastings branch to an in-market player (Brighton-based $2.2 billion Lake Trust Credit Union), looking to both fortify its existing presence and potentially upgrade its facilities to the more aesthetically compelling Mercantile operation. The other involved two St. Joseph-based institutions (the $250 million Edgewater Bank, and the $3.3 billion United Federal Credit Union), looking to align in a combination that appears to have both defensive (protecting one’s backyard) and offensive (leveraging Edgewater’s commercial lending expertise) implications.

The credit union M&A trend continues, and in uncertain times with heightened market volatility, it further demonstrates the perceived power and stability of a formidable cash buyer. I recognize that this continues to be a somewhat sensitive topic on the community banking front, but, from a devil’s advocate standpoint, the branch was assessed by multiple logical financial institutions of all charter types, while the premium pricing depicted in St. Joseph would appear to have cleared the table of other possible players. Succinctly, while the dynamics of such credit union incursions into the community banking sector may not be palatable to some folks, the shareholder-oriented obligations and fiduciary responsibilities that take center stage in any transaction cannot be conveniently put on a shelf based upon the potential participant, especially if that participant aspires to the same community-oriented model. If the understandable angst is related to the tax-free nature of the participant, which then may give it a competitive advantage in these situations, then it is that tax-free status that needs to be addressed.

I look forward to talking with all of you about the election and the economy, and hopefully soon a pandemic that we are beginning to firmly put in the rearview mirror. I am encouraged by continued gains on the unemployment front and activity picking-up in the manufacturing sector as depleted inventories look to be replenished. If consumer sentiment can remain relatively optimistic, and deferral/forbearance activity can continue its positive trend lines, it may help the economy navigate what are sure to be turbulent times in the coming months. I’ve said it often since March, and while my optimism grows, it bears repeating: the only consensus appears to be that no one really knows for sure how this crisis will ultimately play out.

In closing, attached please find our monthly summary of Michigan’s financial institutions. And again, this simple but heartfelt counsel: Be careful. Be smart. Stay healthy. Take care of your family, your colleagues, your community. Most important, be sure to take care of yourself.