With a dramatic broad market recovery attracting significant press coverage in recent weeks, it’s worth noting that, technically, not all participants have truly recovered from the initial early-spring Covid-induced downdraft. Recall how devasting and swift that sell-off was:  it only took about six weeks for all major market indices to decline roughly 35%, recording the fastest ever fall into bear market territory. Conversely, we have now just recorded the fastest ever “recovery”, with major market indices pulling out of their bear market readings over the past five months in going from their previous market highs to new records. For context, historically that “round trip” has usually taken about six YEARS on average. We’ve just witnessed such an occurrence in less than six MONTHS. But as the chart below painfully depicts, the banking sector has not been an active participant in this latest rocket-fueled rally: 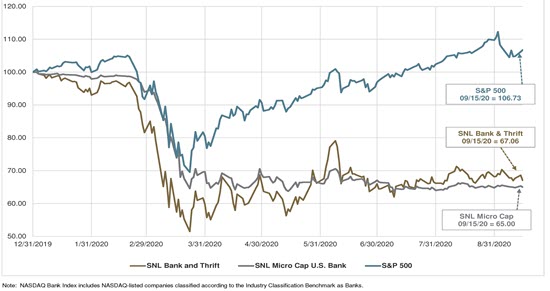 This column is not intended to opine on either the relative strength or rationale of recent market activity. There are more than enough market pundits dominating the cable news networks with their thoughts and projections about where we are and where the market may be headed. I simply point to two items that I believe to be noteworthy amidst all this activity.

First, by all accounts, the meteoric market advance in recent months has largely been led by the tech sector. Seemingly logical on all fronts, as the virus effectively shut-down broad swaths of the national economy, and often technology-driven underpinnings and capabilities proved to be the primary (and sometimes only) means of conducting commerce as folks sheltered in place. We can discuss ad nauseum one’s views on the pluses and minuses of automated activity, but it is clear that Covid didn’t introduce a new means of business interaction on multiple fronts — it simply accelerated it. For banks, the ability to effectively leverage digital platforms and address customer needs in a timely manner proved critical. Again, nothing new with regard to the oft-discussed industry trendlines of increasing online and digital interactions with customers — rather, simply an acceleration of such activity as a means of survival in this new reality.

Second, the banking sector is typically a bellwether for the economy. Consequently, while the broad market advances may help underscore technology’s advancing power, the fact that at the same time bank stocks continue to lag would seem to gently remind us that we are not yet out of the woods. These stocks do not hover around tangible book value if not for the expectation of a challenging environment and meaningful credit losses on the horizon. In recent months, we talked about reserve building at the nation’s largest banks in Q1 as both a sound risk management effort amidst all the uncertainty, but also a harbinger of what may lie on the horizon should the coronavirus-induced economic downturn prove deeper and/or extended in its duration. Recent Q2 press releases reflected the same significant loan loss reserve build-up across the industry(Q2 aggregate provisioning in excess of $60 billion for all banks, on top of Q1’s total loan loss provisions north of $50 billion), as the reality of improving, but still-elevated unemployment measures, serve as a cautionary reminder as to the economic costs they ultimately will impose: 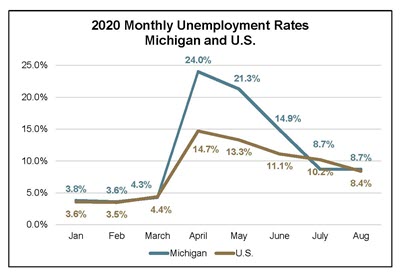 A few high-level thoughts to keep in mind as we move through Q3 and the balance of 2020:

Massive economic stimulus and government support may largely mask, at this point, the potential credit risk fall-out as these programs run their course and bank forbearance efforts curtail. With each passing month we attain additional clarity on the potential impact of the coronavirus, but still much uncertainty remains as to how loan books will ultimately be affected. With forbearance, deferrals, and modifications being closely tracked, a few intra-quarter disclosures from some larger banks seem to reflect that many borrowers are not extending these cautionary measures and accommodations. However, that still leaves many businesses and consumers precariously on the edge as Congress debates any additional stimulus.

While trying not to read too much between the lines, the Fed released its hypothetical stress scenarios that will again put the nation’s largest banks through their paces. With the potential to provide some carefully veiled insight into what the Fed may be seeing and expecting, their two severely-adverse scenarios depicted sharp economic downturns with slightly altered timelines for employment/GDP recovery (one scenario has unemployment peaking at 12.5% before gradually recovering, while the other scenario has unemployment remaining above 9% through the test’s late 2023 horizon). It would appear the stress tests are looking to frame the potential course of the virus and the timing of possible therapeutics, in assessing the resiliency of the banking sector. As I’ve stated in prior months, the industry comes into this downturn with much stronger relative capital levels and risk management architectures, while the past two quarters have now largely elevated reserve levels to where they were at the height of the Financial Crisis. We will watch closely the release of these stressed results at the big banks, which is expected later this year, to determine what they might infer with regard to currently stagnant (but existent) dividends and stock repurchase plans that have been put on the shelf at this time. Any indication of “continued and/or heightened confidence” in the industry’s ability to weather this storm, to the extent that the Fed relaxes any current capital constraints, will obviously bode well for the sector.

The current relative euphoria in the equity markets has reinforced the old adage that “you can’t fight the Fed”, as the implications of aggressive fiscal support and continued near-zero interest rates has clearly been a contributing factor with regard to investors driving the market higher as it “climbs its wall of worry”. Succinctly, and placing logical risk considerations aside for the moment, stocks simply look more compelling in the face of tumbling yields. Is the worst behind us? I don’t know. But I am encouraged by continued gains on the unemployment front and activity picking-up in the manufacturing sector as depleted inventories look to be replenished. If consumer sentiment can remain relatively optimistic, it may help the economy navigate what are sure to be turbulent times in the coming months. The only consensus appears to be that no one really knows for sure how this crisis will ultimately play out.

In closing, attached please find our monthly summary of Michigan’s financial institutions. And again, this simple but heartfelt counsel: Be careful. Be smart. Stay healthy. Take care of your family, your colleagues, your community. Most important, be sure to take care of yourself.