M&A: Some Deals are Closing, While Others are Cratering, as Uncertainty Continues to Dominate the Landscape

After witnessing fairly consistent levels that approximated 250+ transactions announced in recent years, the M&A activity in the banking industry has, much like everything else in this pandemic-framed environment, been dramatically altered.  Annually, from 2017 through 2019, the number of acquisitions in the sector totaled 255, 254 and 259, respectively. Through early July of this year:  51 transactions.  More telling, since April (when COVID-19’s impact was driving, both virtually and effectively, an economic shutdown across the country as shelter-in-place orders firmly took hold), there have been only 11 deals announced, while others already in the pipeline have since been terminated. As the chart below reflects, extrapolating on activity over just the past few months would reflect an annualized run-rate approximating 40-45 M&A transactions in the banking space. 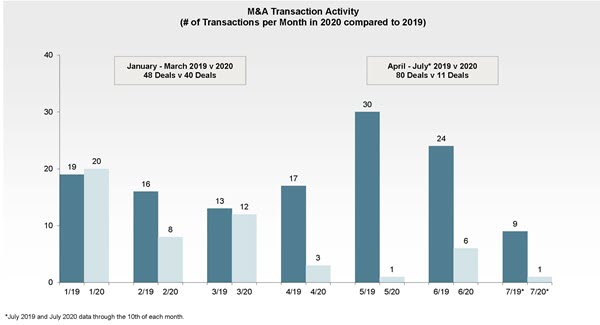 Here in Michigan, two deals were announced in early 2020 just before the impact of the pandemic was being fully felt across the industry. ChoiceOne was able to complete its acquisition of Muskegon-based Community Shores earlier this month, while Arbor Bancorp and Howell-based FNBH Bancorp decided to terminate plans to join forces. Each transaction exhibited compelling rationale for merging when first announced, and subsequently logical reasons for pursuing the paths they ultimately chose. Full disclosure, we advised Community Shores on its merger and had always been impressed with the bank’s focus on their Western Michigan markets and the organization’s ability to weather the Great Recession by relying on its community-oriented leadership team and a supportive Board of Directors. We have also had the opportunity to work closely with ChoiceOne over the years, and more recently had advised them on their franchise-transforming merger-of-equals with County Bank Corp (parent of Lakestone Bank) in late 2019. Coincidentally, we felt that the consequent “East & West” combination of those two organizations should ideally bring talented and seasoned senior management teams under the same roof, while positioning the resultant $1.4 billion operation to opportunistically pursue franchise-enhancing transactions with other community-oriented banks looking for a supportive partner with the products, services, capital strength and operational resources to better serve their markets. For ChoiceOne, the first case-in-point in proving that hypothesis: Community Shores.

The above referenced two transactions have also been the only M&A announcements in Michigan this year, and both occurred before the ramifications of COVID-19 began to play out. There have been zero deals involving Michigan banks since the onset of the pandemic, as most folks across the industry appear to be taking a wait-and-see approach as they hunker-down and fortify balance sheets amidst the economic uncertainty. And, of the 11 aforementioned deals announced since early April, much like the ChoiceOne / Community Shores transaction that was consummated, they too appear to possess somewhat unique attributes and characteristics (and/or are relatively small) that might render them largely unaffected by the pandemic. Do not mistake this as saying some banks are immune to what is happening in the economy. To the contrary, it is simply a matter of degrees as to how vulnerable some are versus others, and until there is some additional clarity around credit quality, we would expect activity to be largely dormant. Rather, the structures of the transactions themselves and the dynamics of the parties involved may simply better position each to actually make it to the finish line in this environment. A handful of the post-March ’20 deals involve banks with total assets less than $100 million (read: limited execution risk for a much larger buyer), while others possess shared ownership components between holding companies or MOE-type characteristics. Bottom-line, if there is uncertainty within one’s own loan portfolio, they would be hard-pressed to take on someone else’s loan book at this time.

But we are seeing “discussions” once again slowly emerge, as bankers look to stay connected to their brethren in the industry in an effort to both stay abreast of developments within the sector, while also maintaining open lines of communication with regard to potential strategic alternatives down the road. However, today any stock-based deal would appear to imply lower premiums as currency-strength and implicit valuations have declined during the pandemic, and cash-based deal structures would appear to potentially carry heightened leverage risk for the buyer as capital ratios are presumably lowered in the process. Our view, aside from the limited “defensive” and/or depressed-valuation transactions that may surface in the coming months, 2020 is likely to remain muted with regard to M&A activity.

Anecdotal evidence is signaling it could/should be a bumpy Q2 for banks as elevated provisioning continues. Empirical evidence as to how pervasive this might be is yet forthcoming. Investors and analysts will be carefully parsing Q2 bank results in the coming days for any meaningful guidance on the state of the economy. Unemployment levels, while improving of late, remain significantly elevated. Massive economic stimulus and government support may largely mask at this point the potential credit risk fall-out as these programs run their course and bank forbearance efforts curtail. With each passing month we attain additional clarity on the potential impact of the coronavirus, but still much uncertainty remains as to how loan books will ultimately be affected. As we stated last month, with continued implied Federal support, potential additional stimulus programs coming out of Congress, and unknowns with regard to the course of the virus itself, it would seem that projections at the federal level are currently no more accurate than the projections many banks are currently formulating and re-working amidst all this uncertainty. I believe the fact that the country’s six largest banks set aside more than $25 billion for loan losses in their Q1 results (and recent Fed-directed stress tests would appear to indicate that the results of their “hypothetical” scenario that were designed to mimic the most severe economic expectations of the pandemic reflect sizable loan losses; consequently, even larger provisions may be on the horizon for the big boys in Q2), pretty much sums up the uncertainty all of us continue to manage. Hence, the prior years’ robust level of industry consolidation would appear to be in a holding pattern. For how long, and to what degree pricing dynamics are altered, remains open to debate. The only consensus appears to be that no one really knows for sure how this crisis will ultimately play out.

While the market tries to assess when it expects both COVID-19 will be contained and when consumer confidence will fully return, there exists no useful paradigm for the current coronavirus-induced crisis and its potential to trigger additional waves and lockdowns.  At the moment I take comfort in that both  Congress and the Fed continue to be prepared and willing to “do whatever it takes” to implement constructive measures during this unprecedented time, and hopefully (ideally) such measures will be guided by fiscal responsibility in their execution. But with cases spiking in certain regions of the country, and containment efforts somewhat slowing the ability of the economy to full re-open, credit risk remains a wild card for the banking sector.

In closing, attached please find our monthly summary of Michigan’s financial institutions. Enjoy the onset of wonderful weather and the opportunity to get outdoors during this somewhat surreal time. And again, this simple but heartfelt counsel: Be careful. Be smart. Stay healthy. Take care of your family, your colleagues, your community. Most important, be sure to take care of yourself.