Roughly a month ago, no one thought we’d be dusting-off “pandemic-oriented” contingency plans, but here we are. Seemingly weeks, or months, if not years of activity on multiple fronts (economic and social), feels like it has been condensed into a few days. The daily volatility in the markets is succinctly summarized in the chart below: 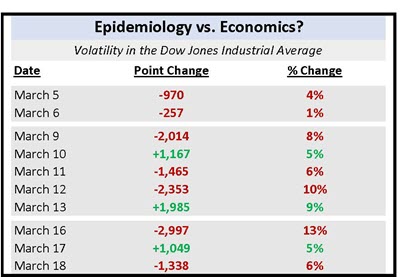 This past Sunday night (March 15th), the Fed took aggressive steps by slashing rates to near “0”, launching a $700 billion bond purchase program and injecting liquidity into the system to support the financial markets’ plumbing. All hands appear to be on deck, as the Fed seeks to access a variety of tools at its disposal to hopefully calm investors while reminding participants that it will seek to do whatever is necessary to keep markets properly functioning. To date, the steps have met with limited “emotional” success in mitigating market uncertainty and that would appear to fall almost entirely on the fact that no one really knows how this coronavirus, labeled COVID-19, will play out.

As the chart above reflects, over the past two weeks we have seen multiple market-programmed circuit-breakers tripped, eight days of 1,000-point moves (with three sessions falling 2,000 or more points), as the Dow and other major indices have fallen 30% or more from their all-time highs. In the process, we have blown through “correction” territory (a drop of 10% or more from the high) and now rapidly beyond “bear market” classification, as defined by a 20% decline from the market’s peak.

It now seems like a memory that it was as recently as February 12th that the Dow closed over 29,500. In a little over a month, nearly 10,000 points (or 33%) has been shed from the index. Bear markets often destroy roughly three years of a Bull market run — we are there.

We have witnessed unprecedented postponements and terminations in sporting events nationwide, including all major sports leagues, and the closing of schools, as well as material restrictions on social gatherings across the country. As Michigan reported its first virus-related death this afternoon (March 18th), my hope is that all these shuttered athletic facilities are not at some point converted into de facto “field hospitals” to deal with a dramatic surge in COVID-19 cases. But again, the uncertainty and resultant fear seem to be driving the broad-based indiscriminate destruction of wealth in the markets. On Monday (March 16th), we witnessed the Dow’s worst one-day total point-loss ever, of nearly 3,000 points, with this decline of approximately 13% representing the bloodiest one-day percentage-drop since “Black Monday’s” more-than 22% freefall in 1987.

I can hear the voice of a respected mentor from my early days on Wall Street, as I and some of my colleagues huddled around a Quotron machine that day frozen in disbelief as to what was playing-out on the floor of the Exchange. As it felt like sand was shifting beneath our feet and the world was seemingly unraveling by the minute, he calmly said: “Fellas, greed and fear drive the market. And it is at times like this that you learn that ‘fear’ is a much stronger emotion. This too shall pass.”

Not sure how meaningful our usual Michigan Banking Summary attachment will be at this time, as valuations seem to be getting pounded by the minute. Last look I noticed that many of our nation’s largest and most actively traded banks are currently at price-to-tangible book value levels below where they were just before the most recent Bull market launched in March of 2009.  Yes, 2009.

And here in Michigan, our state’s largest bank has fallen approximately 60% in the past twelve months, with most of that decline coming in the last few weeks. As I write this missive, and take note of today’s closing prices, I see that TCF may have experienced the classic “capitulation trade”, as the stock is down another 24% on this day alone. But in light of the daily market gyrations of the past few weeks, it is clearly premature to assume any particular stock may have bottomed, as recent activity in the sector has reinforced the visual of trying to catch a falling knife.

As aforementioned shutdowns have been put in place, I caught a measurement recently generated by the Bureau of Economic Analysis. In the category of “a picture is worth a thousand words”, I think it succinctly captures what may be driving the underlying turmoil in market valuations across all sectors. A recession now appears to be all but inevitable. The question the market, and all of us, now seem to be wrestling with, is how deep and how long? 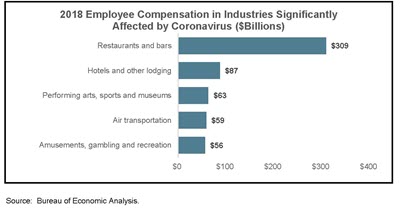 We are in the early stages of inevitable stress in cash flows for many retail-oriented businesses in light of these social distancing guidelines. This is in no way intended to be a medical treatise. Getting humbled by organic chemistry my freshman year of college ensured I would never pursue a career in the medical profession.  A few weeks ago I worried that without a totalitarian government like China, we would struggle to impose aggressive containment procedures because they might run counter to the freedoms and our nation’s liberties that we have all come to enjoy (and sometimes take for granted). I worried about the risk that asymptomatic and/or young folks that might be unknowingly carrying the virus could inadvertently infect the more vulnerable cohorts of our society. But most people across the country can today look out the window and witness “self-containment” efforts beyond what I would have imagined. While disheartening today, and economically debilitating, it is encouraging for tomorrow. And tomorrow is what we must look toward. It is a function of time; unfortunately, at this point we just don’t know how long it will take to return to normal, or in all likelihood a “new normal”. But again, encouraging, and while all of this is already having a devastating impact on the consumer sector, I am taking solace wherever I can find it if it may mean an expedited return to that new normal.

On the community banking front, be a source of information, communication, and comfort. These are the times when community banks can truly differentiate themselves from the industry’s larger brethren. Speaking of which, recently our nation’s largest banks announced a halt to their massive stock buyback programs. It would appear that the poor “optics” of taking capital out of the market at a time when directed lending to affected entities could be critical, has apparently overwhelmed the generally beneficial “economics” of such strategic deployment initiatives. These are already the shoes many of you occupy: being there for your customers in difficult times and putting the resources and creativity of your organizations at the disposal of those now-struggling businesses that you recognize are the lifeblood of your communities. Adapting a famous C.S. Lewis quote, that many of you embody day-to-day, a crisis doesn’t build character, it reveals it; and integrity (doing the right thing) is all about what you do when no one is watching.

Last month we tried to highlight continued relatively solid economic underpinnings as well as the emergence of particular headwinds:  Inflation is tame, by all measures. Unemployment rates continue to trend at 50-year lows. However, there are emerging headwinds that give all of us pause. Weaker global growth (most recently in China and Germany), uncertainty surrounding the ramifications of Brexit, a sharp increase in market volatility that began in late 2018 (although muted for much of 2019, before re-emerging of late), continued unknowns in terms of the potential implications of trade tariffs….negative yields in Europe, and, most recently, the unknown economic ripple effects of the coronavirus, to name just a few.

The coronavirus is now clearly #1 on every list, with just about everything else pushed to the side. Its impact, while still largely unknown, has already battered both the business landscape and the emotional psyche of our nation. To what degree, on both counts, only time will tell.

As I’ve stated numerous times in past Monthlies, I’ll reiterate again with emphasis:  We still operate in a risk-assessment business. Maintain underwriting integrity and discipline. Manage capital and reserves carefully. Emphasize sound risk management practices and a robust architecture. You are stewards of your shareholders’ investment. The constant, for successful banks, has been adhering to solid credit standards and sound cost controls. Whatever is on the other side will, inevitably, pass. Do what you need to do so that when it does, you are still standing.

In closing, attached please find our monthly summary of Michigan’s financial institutions. I’ll dispense with the usual “please do not hesitate to reach out…” narrative, and instead simply say this: